A universe from nothing

This site is dedicated to the proposition that the universe originated spontaneously from nothingness. Not a relative nothingness, consisting of a quantum soup plus natural law, as Lawrence Krauss suggests in his book “A Universe from Nothing”, but a nothingness devoid of matter, of space, of time, of natural law and even of mathematics. Absolute nothingness.

Admittedly, this proposition is not intuitively obvious. How can something arise out of nothing? But the alternatives are limited: either the universe originated from absolute nothingness, or it has always existed in some form or other. But then the question “Why has there always been something?” demands an answer, and that answer is inevitably more complex and therefore less credible than our proposition, as we show on this site.

Simplicity is the key. The simpler the explanation, the more credible it is, provided that it covers all the observations. And the more complicated something that has arisen spontaneously is, the more likely it is to have a simple explanation, as Darwin demonstrated. As Einstein said: “Everything should be as simple as it is, but not simpler”. 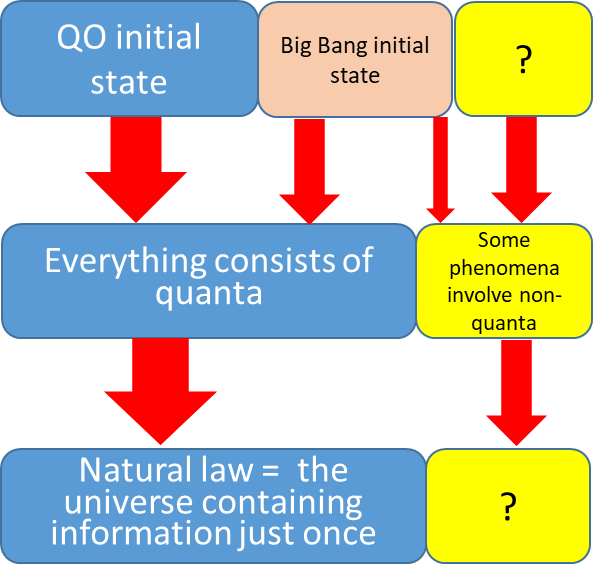 This site elaborates on the ‘universe from nothing’ proposition by suggesting that the initial state of the universe consisted of a single quantum, together with the rules that quantum systems obey. Anything simpler than that cannot generate a universe, whereas this initial state is quite capable of doing so. In fact, it can generate a universe by applying only behaviour that has been observed, as we show on this site. We do not need to invent new science, but only to understand and apply current science better.

Supposing that the universe originated spontaneously from nothingness, this initial state is by far the most credible account as to how that happened, because simpler things are more likely to pop out of nothingness than complicated things. Supposing that the universe has existed forever, the proposition that it was for a time in this initial state is also the most credible account for the current appearance of the universe, for essentially the same reasons. That makes the proposition that the universe at one time consisted of a single quantum plus the rules that quanta obey eminently credible. Provided, of course, that it can indeed account for all that we observe.

Everything consists of quanta

Given the initial state, it follows that everything that exists consists entirely of quanta. For if there is something that does not consist of quanta, then there must have been a first thing that did not consist entirely of quanta. How did it come into being, seeing that quantum mechanical processes are only ever observed to produce quanta, and nothing else? That would be a second miracle, after the miracle in which something came from nothing. A miracle is only credible if there is absolutely no alternative explanation, but in this case there is.

If everything consists of quanta, then space consists of quanta. On this site, we show how a theory of space quanta accounts for relativistic motion and gravity, and explains galactic rotation curves, galactic lensing and the expansion of the universe, among other things.

If everything consists of quanta, then non-physical things such as mathematics and the laws of the universe must also consist of quanta. To digest this, we must dispense with the prejudice that quanta are necessarily physical. It is a prejudice, because we have absolutely no evidence for it.

Because the principle that everything that exists consists of quanta is the only account of the universe which avoids the invocation of a second miracle, it is evidently eminently credible, regardless of whether the universe originated from nothing or has always been there.

Natural law is a quantum phenomenon

One of the cornerstones of quantum mechanics is the principle that a quantum system contains the same information only once. We see this principle in action in the phenomenon known as entanglement, but also in the Pauli exclusion principle, on which all chemistry is based, and the Standard Model, which is fundamental to our understanding of elementary particles.

We suggest that this principle also is at the basis of the operation of natural law. For example, the concept ‘electron’ consists of one or more quanta, and the information as to what it is and how it behaves therefore exists only once, just like the information as to how a computer program behaves exists only once in a computer system and is applied every time the program is activated. Natural law, in this sense, is the uniformity of behavior that ensues when quanta which embody a concept quantum (or quanta) follow the pattern of that concept.

This conception of natural law requires no new science, just better application of the science we already have. There are, essentially, no alternative explanations. Modern science seeks only to document natural law, not to understand how it operates. The question as to what produces the uniformity in behaviour is not asked. Scientists accept that that is the way things are. But if we see a computer program respond in exactly the same way to similar information requests, we would not be satisfied with the answer that this is just the way things are, so why should this be acceptable from scientists? We must conclude that the principle that natural law is a quantum phenomenon is eminently credible, again regardless of whether the universe originated from nothing or has always been there.